Manchester United midfielder Paul Pogba has been offered to various clubs around Europe this summer, according to media from several countries.

Scoring a goal in a triumphant World Cup final, and perhaps unlucky to not come away with the Man of the Match too, Pogba’s profile has been raised ever further. And that means even more transfer rumours.

The Catalan media have already claimed over the past few days that Mino Raiola has travelled to Barcelona to offer his client to the club, and now they have some more detail on the situation.

Monday’s edition of Sport reports Pogba wants a change of scenery, wishes to leave Jose Mourinho behind, and would like to wear the Barca shirt. 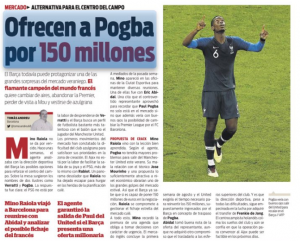 It’s stated Raiola ‘doesn’t give up’ and has held a meeting with Eric Abidal, Barca’s new technical director, but it’s reported the club aren’t interested. Barca look for a player ‘much more talented on the ball than the Manchester United player’.

Undeterred, Raiola is said to have made it clear that if Barca offer €150m then signing Pogba won’t be so difficult.