Real Madrid are really moving through the gears with their summer recruitment.

Luka Jovic is already an agreed deal, and claims in both France and Spain say Ferland Mendy could be announced imminently. Eden Hazard is expected to join from Chelsea, and then the concentration will move to a big signing in midfield.

Manchester United’s Paul Pogba is considered a ‘priority’ by his compatriot, but a deal is still very far away. L’Equipe state Madrid believe the terms Pogba wants are ‘unacceptable’, and therefore a transfer is ‘very complicated’.

That’s even before a transfer fee comes into the equation, with Manchester United likely looking for a profit on what they paid Juventus for the player.

It may take Pogba agreeing to a lesser wage, and then Madrid could enter talks with his club to try and find a fee. 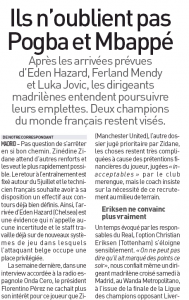 Interest in Tottenham’s Christian Eriksen is said to have faded, partly due to his performance in the Champions League final. That would be a little harsh, given the whole match was something of a disappointment, and the Denmark international didn’t look worse than the rest.

On top of all of that, Madrid still haven’t given up on Kylian Mbappe.