Manchester United’s Paul Pogba was one of two outfield France players to train on Monday.

The midfielder, however, limped off the training ground with an injury and the initial diagnosis indicated he will be out of action for eight to ten weeks.

Bayern Munich defender Benjamin Pavard was the other outfield player to train alongside the 28-year-old at Clairefontaine.

Didier Deschamps started the Bayern man as a right wing-back, and during the final at the San Siro, Spain attackers were pressing Pogba outside the box and he didn’t receive support from his teammates, especially Pavard.

The Manchester United midfielder shouted at the player for his lack of support and this was caught on camera. 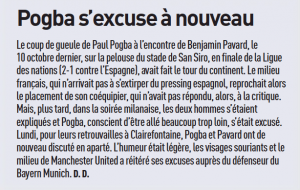 L’Equipe say the midfielder had apologised to Pavard after full time and he reiterated his apology when the pair were reunited at Clairefontaine on Monday.

They say the ‘mood was light, the faces smiling’, but all of this was before Pogba picked up an injury.