Manchester United have been left alone in the race for Sporting captain Bruno Fernandes, according to the Portuguese media today.

Newspaper Jornal de Notícias brings a story saying the price demanded by the Lions has driven away other clubs such as Liverpool, Manchester City and Tottenham Hotspur.

The outlet claims that, theoretically, the situation makes things a lot easier for Manchester United, who should have no competition to sign the 24-year-old.

However, the Red Devils are not matching Sporting’s demands for Fernandes. While the Lisbon side ask for €60m, the Old Trafford side refuse to pay for it, and offer only €35m. 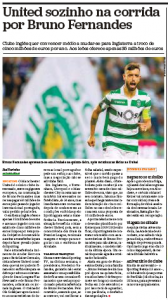 According to Jornal de Notícias, Manchester United’s plan is to make the player accept a salary of €5m per season, and after having his positive answer, use it as a pressure to convince Sporting to sell.

The truth is that the Portuguese media doesn’t have much about Fernandes today, and it feels like these claims have been encouraged by others from England and Italy.

Newspaper Record is the only other one with a story on him, claiming that Manchester United plan to accelerate talks for their targets, since they want new signings to be in the pre-season squad.

It’s claimed that some developments should happen this week, since Fernandes is one of Solskjaer’s top wishes for the summer window.