A day after Mino Raiola gave an interview to The Athletic, Tuttosport have come out with a report focusing on Juventus’ interest in Manchester United’s Paul Pogba.

Apart from the France international, the Turin club have identified other targets to strengthen their midfield next season and this gets mentioned at the end of the report.

Having arrived at Old Trafford from Ajax in the last summer window, the Netherlands international has struggled for regular minutes in his first season in England.

The Old Lady ‘like’ the Dutchman and a deal could be done since the Red Devils are said to be open to signing Juve midfielder Adrien Rabiot. 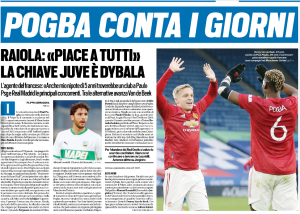 As far as the report goes, Ole Gunnar Solskjaer’s side wouldn’t mind sacrificing Van de Beek if it means ‘getting their hands’ on Rabiot.