The Portuguese media has today been full of stories about Sporting fullback Nuno Mendes and his chances of moving to Manchester United.

This morning, we already covered the claims from A Bola which said the player’s agent Miguel Pinho is flying to Manchester and will try to make the Lions’ biggest sale ever.

Now it turns out that a couple more outlets have something to say about Mendes as well. One of them is Record.

Following claims from the English press about the first contacts for the transfer, the newspaper reports they’ve managed to ‘confirm’ the news.

It’s said the ‘new stage of talks’ have been established ‘by an intermediary with strong links to the Red Devils’. The official is claimed to be ‘preparing the ground for a concrete offer’ and get things done before the Euros. 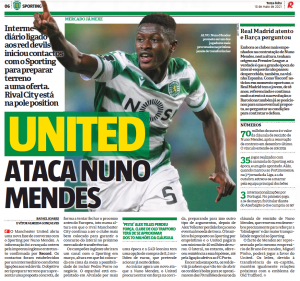 Record claims there was once a chance of Alex Telles being involved in the deal, in a scenario where the Brazilian would be loaned to Sporting and the Red Devils would pay at least €40m for Mendes. The former Porto player, however, rejected the possibility, and the Old Trafford side should now spend something close to €70m to sign the Lions’ youngster.

The newspaper makes it clear that Manchester City continue to be in ‘pole position’ for Mendes, as they already have a ‘channel’ of communication with Sporting due to the transfer of Pedro Porro. But Manchester United now try to get the lead for the signing, and have the advantage of a good relationship with agent Miguel Pinho, who also represents Bruno Fernandes. 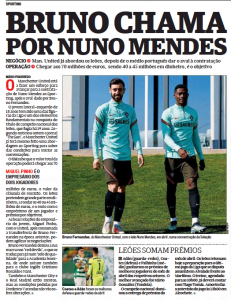 Newspaper Correio da Manhã is another one with a story on Mendes. They claim Manchester United are going after the fullback following the ‘approval’ of Bruno Fernandes for the signing.

The outlet says the transfer could reach €70m. That’d be between €40m and €45m in cash, plus the loan of a player and performance bonuses.

It’s once again claimed that agent Miguel Pinho could accelerate things for Manchester United, even though there’s still competition from the likes of Manchester City and Real Madrid.

So that’s three Portuguese newspapers having sources confirming the chances of Nuno Mendes’ transfer to Old Trafford. We just wonder if following such a good season from Luke Shaw, with Alex Telles also proving to be a good backup option, Ole Gunnar Solskjaer’s side would really spend €70m on another left-back, regardless of how good he could be.