Manchester United have once again scouted Benfica, this time in the away league match against Aves on Monday night, according to the Portuguese press.

It’s newspaper Record who reports the Red Devils’ visit to the game, and points out the one target who the officials had an eye on: João Félix.

The youngster has been attracting some huge attention from European sides this season, and it’s no surprise that Manchester United are one of those who want to see him live. Right now it would be thought the Premier League club are working out their targets for the summer, and these trips form an important part of that transfer planning.

The attacker didn’t have a brilliant participation in the 3-0 win, but was still important for the several chances created when the ball got to his feet. 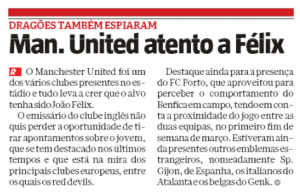 Felix stands with nine goals and six assists this season, and his importance at Benfica is pretty impressive for a 19-year-old.

His €120m release clause is good protection for the Eagles, given it’s unlikely anyone would spend such an amount.

Manchester United have been watching Benfica for several years, way before the youngster got into the team.