With Bruno Fernandes getting most of the attention from the rumour mill in the past month, we’ve read very little about João Félix.

Although the Benfica wonderkid keeps impressing, it’s been a while since we last read heavy claims on Manchester City and Manchester United interest in the player.

Today, the Portuguese press brings some relevant news on the attacker’s future, since his contract is not being renewed, as had previously reported.

Despite claims that Benfica would raise his release clause from €120m to €200m, it has now been dismissed by club president Luís Filipe Vieira.

“João Félix is a player with five years of contract with Benfica and we have no need to make a renewal. There is a release clause of €120m, so we’re not worried at all,” said the president. 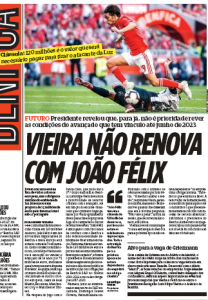 Newspaper O Jogo claims that Vieira had already rejected a €75m offer from Juventus for Félix, while the likes of Real Madrid, Barcelona, Manchester City and Manchester United are all interested as well.

Sapo report a Manchester United official is in Lisbon right now, watching the youngster. His team are currently winning 3-0, and he scored the second.

Félix is finishing his first season for the first team with 20 goals and 11 assists in 42 appearances.