Although the visits of scouts to Portuguese League games has rarely been reported on this season, we finally get to see a piece about it today.

According to newspaper O Jogo, Manchester United were one of the clubs who had an official at the match between Benfica and Boavista last night.

The outlet highlights that the club where the likes of Diogo Dalot, Bruno Fernandes and Cristiano Ronaldo play had an ‘observer’ at the game, which ended with a 3-1 win for the Eagles.

As usual, there’s no information on who the Red Devils were watching, even though we can probably have an idea about those who may have have drawn attention with a good performance. 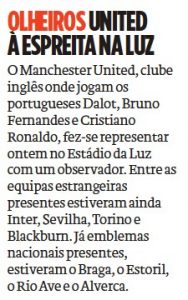 We can’t speak about last night’s game without mentioning Darwin Nunez. The striker once again scored a brace, following the one he already achieved in the last fixture versus Santa Clara, and led the way to Benfica’s win.

The Eagles’ solid defence should be credited, with a good performance from South American duo Lucas Veríssimo and Nicolas Otamendi, while midfielder Julan Weigl helped their protection very well too.

Since it’s quite early in the season, it’s safe to say Manchester United hardly have any Benfica player identified as a target. Now by looking at the age of those who did well, perhaps the Red Devils will be keeping an eye on the next performances from Nunez, Veríssimo and Weigl.