We thought we’d hit our quota of Bruno Fernandes stories for Saturday, but Jornal de Noticias have some claims that we really can’t ignore.

The Portuguese newspaper doesn’t make as many claims as some others. More broadsheet than tabloid, they don’t have a concentration on sport, but obviously cover it.

Their Bruno claims today are different from what other newspapers are saying, and JN make it clear the information is from their own source.

So what are they saying? Well, Manchester United are said to have made an offer worth €55m plus a further €25m in bonuses, whereas Tottenham have offered €65m.

The figures in this article aren’t what is reported elsewhere. 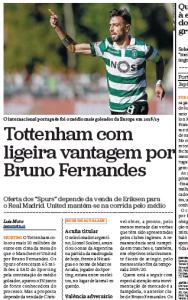 Spurs are in the early stages of negotiation, and it’s made clear the Old Trafford club can’t be ruled out.

Tottenham would need to sell Christian Eriksen first, and it’s stated Manchester United don’t need ‘capital inflow’ so ‘can move fast’ to close the deal when they choose.