For a couple of years, the Portuguese press has been saying Manchester United are one of the clubs who are interested in Benfica’s Ruben Dias.

Ole Gunnar Solskjaer likely needs to improve his central defensive options, and find someone who can partner Victor Lindelof long term. At 22 years of age, and being very highly rated, Dias falls into that bracket.

Now this weekend, the English media had a story about the chase, and that’s why three Portuguese newspapers come up with their own stories covering it today.

Correio da Manhã and O Jogo both just cover the claims which say the Red Devils turned their attention to the Benfica defender since Kalidou Koulibaly would be far too expensive.

They cover that Dias is younger and cheaper than the Napoli player, and only €60m would be needed to sign the Portuguese international. 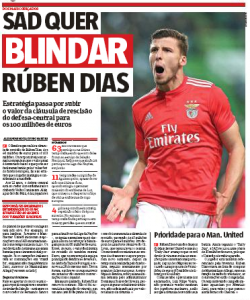 But Record comes up with a story which could change the scenario a little bit. They say Benfica consider Dias’ release clause to be too low, and would be planning to give him a new contract.

The eagles, who increased the clause from €45m to €60m last summer, would now be expecting to change it to €120m this time.

The reason for it would be the interest from the likes of Manchester United and Juventus. So if these clubs are indeed interested, it would probably be a good idea to sign Dias now instead of waiting for him to agree a new contract.

With the Nations League around the corner, there’s very possibility more clubs will become interested in the Portugal defender, so that’s another reason for Manchester United to hurry.