Home Europe Everton have made ‘strong proposal’ for player and club being urged to...
SHARE

Over the past few days, there have been numerous reports from the Catalan media talking about Manchester United’s interest in Barcelona’s Yerry Mina.

Two days ago, we covered a report from Sport, who claimed the 23-year-old is ‘increasingly aware’ that he is moving to Old Trafford, and it also mentioned Everton are still interested in the player.

On Friday, Mundo Deportivo reported the Colombian international has agreement with the Red Devils, the Merseyside club and Lyon… and now it’s for these clubs to reach an agreement with Ernesto Valverde’s side, if they have to sign the defender.

Today’s edition of Mundo Deportivo claims despite what’s been reported elsewhere, Jose Mourinho’s side have ‘not submitted any offer’ for the ex-Plameiras man.

So far, only the Toffees and the French club have submitted offers reaching €30m for the centre-back. 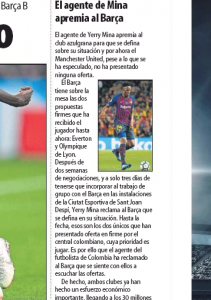 Mina’s uncle and agent, Jair, wants Barcelona to sit down with him and consider ‘strong proposals’ made by Everton and Lyon for his client.

The Spanish champions have refused to negotiate because the bids submitted by these two clubs aren’t close enough to their ambitious €40m valuation.

Unless Manchester United seriously move in, around €30m should surely do it.