AC Milan are hoping to bring Diogo Dalot back to the club from Manchester United this summer but are only interested in another loan deal.

That’s according to Tuttosport, who cover the situation today and say the Portuguese full-back is the ‘first target’ for the Italian side.

However, compared to a year ago, Manchester United are ‘heavily against’ a loan deal at this moment in time.

They would prefer to sell Dalot and ‘monetise’ him this summer if he is to leave and so, at least for the moment, have rejected any type of loan with a right to buy.

In order to break through that, Milan would have to offer a loan deal worth €5m with a right to buy, but that is yet to happen as the Rossoneri need to be ‘very careful’ with their income and expenditure. 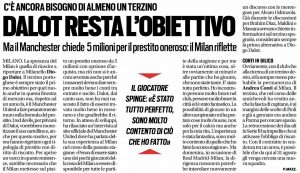 Dalot, for his part, has never hidden the fact he enjoyed his time on loan with the Serie A side last season and would like to return to continue his development.

Manchester United aren’t keen on the loan deal at the minute, though, and unless Milan decide to cough up the cash, it’s likely to be stuck for the time being.