When the Sergej Milinković-Savić to Manchester United rumour first returned, it seemed very clear that Lazio were looking to sell the player.

Indeed, that was said more than once, with there being a worry at the Rome club that his value could further decrease. Two separate Italian sources, SportMediaSet and Corriere della Sera, explained that although Lazio would be looking for more than €100m, they’d likely accept €80m.

Gazzetta dello Sport have had it differently, and today again state president Claudio Lotito is looking for €120m, which seems wholly unrealistic.

The Italian newspaper say Manchester United first need to sell Paul Pogba (which perhaps isn’t as important as is being made out) and then ‘convince’ Lotito to sell the Serbian for less.

Milinković-Savić risks remaining ‘a prisoner’, according to Gazzetta. 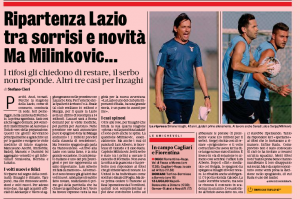 That sounds a little overly dramatic, but it’s also stated he was frowning as he entered training on Tuesday and that ‘speaks volumes about his state of mind’.

Either Lazio do want to sell or they don’t. The discrepancy between the €80m and €120m could be down to disagreement over that, or simply a realisation that pushing their player to market, and looking to be wilfully doing so, isn’t the best negotiating tactic.