Lisbon newspaper Record today has an article about the situation of Benfica’s goalkeepers. As Julio Cesar and Paulo Lopes are both in the latter stages of their careers, and Ederson could leave, the club are now looking to sign a Portuguese youngster to the take one of these places.

As the paper analyses the possibilities, there are a couple of interesting chances that Premier League clubs could be involved.

First, Record are back to say that Manchester City and Benfica have a gentlemen’s agreement for the transfer of Ederson. That’s a claim they made yesterday and now insist on it.

Ederson’s departure could force Benfica to go for two goalkeepers, and one of the players they are monitoring is Manchester United’s Joel Pereira.

Then to get Pereira, according to Record, Benfica would rely on the fact that Victor Lindelof could be joining José Mourinho’s side at the end of the season. The 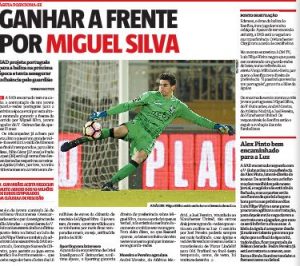 negotiations for the Swedish defender could ‘make things easier’ for the Portuguese side.

It’s clear that there’s a lot of speculation here.

Ederson’s transfer is definitely not done, and as we’ve seen in January, Manchester United’s chase for Victor Lindelof was never that strong.

Sport Witness were able to confirm during the January window that Joel Pereira was unaware of Benfica’ interest, so let’s wait and see what happens here.