Paul Pogba would have to significantly reduce his wages if he was to return to Juventus from Manchester United next summer.

That’s according to both Tuttosport and Gazzetta Dello Sport, who say the Frenchman is an option but one the Italian giants can’t afford at this moment in time.

As you’ll be aware, Pogba is out of contract at Manchester United next summer, and despite the club putting it out that renewal talks are going well, no new deal has been signed.

It means Pogba will be free to talk to whomever he likes in January about a free transfer next summer, and Juventus are sure to be among them.

He was the star of the show during his time in Italy and retains a strong bond with the club, who are equally big fans of him.

Indeed, he has recently been hinting at a move back to the club, with several comments regarding them causing a stir in Italy and England. 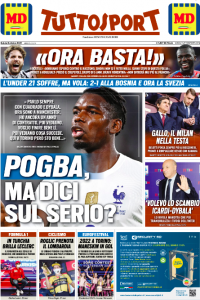 Any deal for him, though, would rest on the midfielder taking a significant wage cut, say both Tuttosport and Gazzetta.

The former says that while Juventus would love a player like Pogba in their midfielder, they cannot do so on his current contract.

While he would be available on a free, his €15m a year wages are untenable for the Serie A side, who ‘do not seem willing’ to spend such an amount.

That would be a huge addition to their payroll, which they have been ordered to keep low as it is, particularly for a player who will be 29 before the end of the season.

Juventus would prefer to sign young players if they are to spend their money, which is why they are looking at Aurelien Tchouameni, a player who suits them but won’t demand what Pogba does. In short, Juventus would not be ‘in pole’ should Pogba leave Manchester United.

That sentiment is shared in Gazzetta, who say the ‘cost and the salary’ have always ‘held back’ the Bianconeri from bringing Pogba back to the club.

They are aware of his availability, but Pogba’s current contract is ‘unsustainable’ for them, and he would have to take a wage cut.

The Italian club will leave the door open for him but would need to get rid of players and reach a ‘collaboration’ with Pogba and his agent Mino Raiola to finalise what is considered an ‘impossible task’.

Pogba, for his part, would have to ‘settle’ for a figure between €10-12m a year, but if his objective is to be a highly paid player in world football, then it becomes ‘difficult’ for Juventus to make a reunion happen.

Recent talk has been that Manchester United will offer €20m a year, a figure that is ‘unapproachable’ for Juventus, who simply don’t have that kind of money available.