Manchester United Diogo Dalot is Roma’s ‘first target’ to improve the full-back position in January, with Jose Mourinho keen to add in the position.

That’s according to Gazzetta Dello Sport, who say that the Portuguese full-back’s ability to play on either side is a major plus point for the Roma boss.

Dalot has found himself out of the picture at Manchester United this season after returning in the summer following a loan spell at AC Milan last season.

It was hoped he would compete with Aaron Wan Bissaka, but that has not proven to be the case, and now he is being linked with a move back to Italy.

Roma are known to be admirers, and several reports over the last few weeks have indicated they are gearing up to make a move in January.

Indeed, just yesterday, we covered several reports on the issue, with it stated that Dalot ‘immediately said yes’ to leaving Manchester United in the winter window.

Gazzetta pick up on that today and state that Dalot ‘the first target’ when it comes to full-backs as he can play ‘both on the right and the left’, meaning the Serie A side can get two players for the price of one. 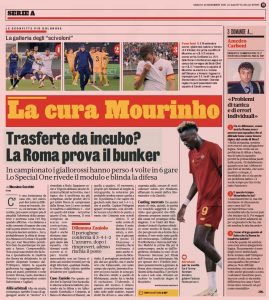 There’s no mention of talks with Manchester United or anything of that nature as yet, but we’re sure that’s going to change as this rumour has been building for weeks.

What is stated is that if Roma are to make transfer moves, then Dan Friedkin needs to be convinced, and for that to happen, Roma have to ‘remain at the top of the table’.

Mourinho has work to do then, with them currently sitting sixth and 13 points behind leaders Napoli.