Jose Mourinho is eyeing up Manchester United duo Nemanja Matic and David de Gea as he plans an overhaul at Roma.

That’s according to Corriere Dello Sport, who say both players are on his list of potential targets for the summer transfer window.

Mourinho was announced as Roma’s new boss two days ago in a surprise move that caught pretty much everyone off guard.

It was inevitable he would soon be linked to his former players at some point, and it didn’t take long for that to start happening, with several already named as possible targets.

De Gea and Matic are part of that, and Corriere Dello Sport continue it today, saying both are on the Portuguese boss’ list of targets.

They state that Matic is a player that Mourinho ‘esteems’ and the fact that he ‘does not find much space’ at Manchester United could make him a viable target. 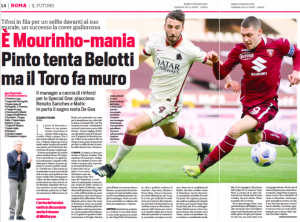 De Gea, meanwhile, is ‘the dream’ signing to solve Roma’s goalkeeping issues, but he ‘costs a lot and has a high salary’.

How much he would cost isn’t mentioned, but it seems that whatever the price currently is, it would be too high for Roma at this moment in time.

Either way, it seems the Manchester United duo are a target for their former manager, so expect plenty of more rumours in the Italian press over the coming weeks.