Earlier today, we brought you an update from France that said Real Madrid and Manchester United ‘reached an agreement’ for Raphaël Varane’s transfer.

L’Equipe now claim ‘all conditions are met’ for the defender to join the Red Devils for a fee of €50m.

The newspaper provides a background on the efforts made by Ole Gunnar Solskjaer’s side to sign the 28-year-old.

It’s explained the Premier League side’s made the first offer of €40m ‘at the beginning of June’, but it was rejected by Real Madrid.

United raised their offer to €45m last week and they found ‘agreement in principle’ with Carlo Ancelotti’s side yesterday. The centre-back’s transfer should be formalised once he completes his medical tests. 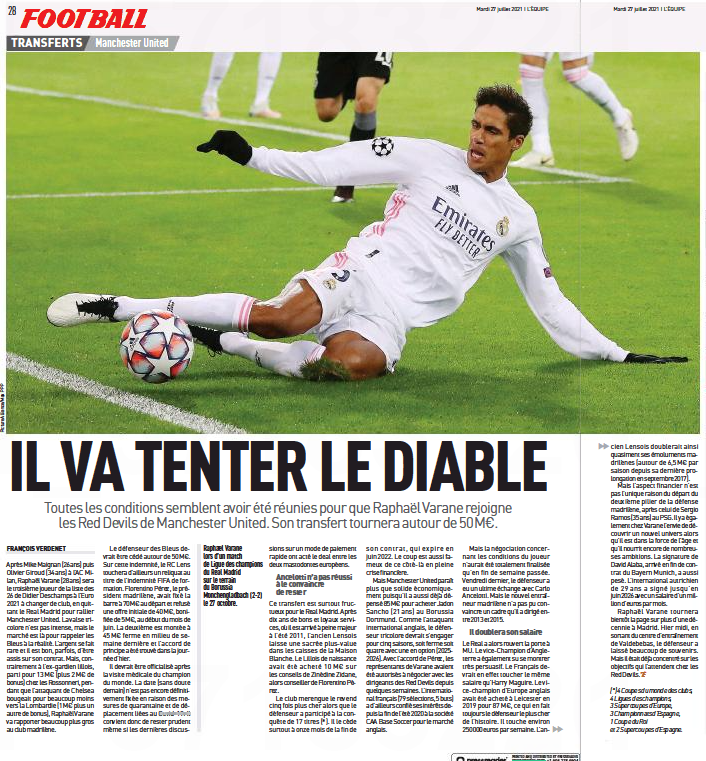 The former Lens man’s representatives have been talking to United for several weeks, after receiving approval from Florentino Pérez. The negotiations, however, were not ‘fully finalised until last weekend’.

Varane should earn €250,000 per week at Old Trafford and with that he will ‘double his salary’, but the financial aspect was not the ‘only reason’ behind his decision to leave the La Liga giants.

The Frenchman wanted to discover a new adventure while he is in his prime and after a decade at Real Madrid, he will soon take up a new challenge in Manchester.

Although Varane was spotted training at Valdebebas on Monday, L’Equipe state the player is ‘focused on the goals that lie ahead’ with United.