Anyone who remembers previous transfer rumours between the defender and Red Devils would probably pass on the stories, but Tuttosport are insistent on building the link.

There’s a genuine lack of clear information, with the numerous stories feeling more like insinuation.

Benatia recently spoke about wanting more playing time, with a move considered, and Manchester United are thought to need a senior defender. In fact, the article states United ‘really need’ the player.

Therefore, the pieces fit together for Tuttosport and it’s claimed the Premier League club are ‘lurking’ for the January transfer.

The Turin newspaper does question whether Juve would want to sell in January, with Benatia being a good option to have around the place.

At 31 years of age and with a contract ending in June 2020, Juve probably have another couple of transfer windows to get themselves a reasonable fee. If Manchester United do 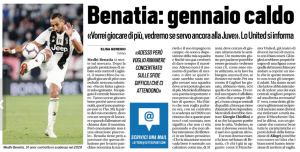 But that would only be the case if this whole rumour isn’t a product of an over imaginative line of thinking.