Atletico Madrid’s Saul Niguez has been linked with a move to the Premier League all summer, despite it seeming that there’s been no concrete approach for the midfielder.

He’s lost prominence under Diego Simeone, and that saw him miss out on Spain’s squad for Euro 2020. The situation was thought to have encouraged the player to leave, and Atletico have been prepared to listen to offers.

Saturday’s edition of Mundo Deportivo reports that Manchester United, Liverpool and Chelsea have been in the picture to sign Saul, yet the Spanish club haven’t received any offer for him so far.

Manchester United have been linked since David Moyes was in charge at Old Trafford, and Liverpool have perhaps been the Premier League club mentioned most this summer when it comes to Saul. Chelsea haven’t been pulled in as much, yet are named in Mundo’s report. 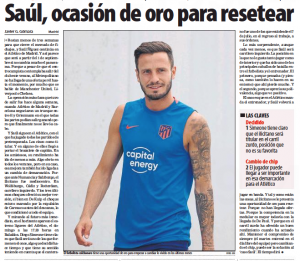 Given the lack of anyone making a real effort, it’s stated Saul has a ‘golden opportunity’ to start the season with Atletico and change his future.

Having done well in preseason, it’s thought the player will start in the team for Simeone, even if he has to play in his unfavoured position on the left wing.