Manchester United legend Peter Schmeichel could be finally taking his first job as a coach soon, according to reports from Portugal today.

This would be Schmeichel’s return to the club, as he played for the Lions between 1999 and 2001, just after leaving the Red Devils.

Signing the 54-year-old is seen as a big deal at Sporting, and is currently being handled by club director Augusto Inácio, who was Schmeichel’s manager during the Portuguese title campaign in the 1999/2000 season.

The idea is to have the former Manchester United star training Portuguese and foreign goalkeepers, in all of the club’s age levels. 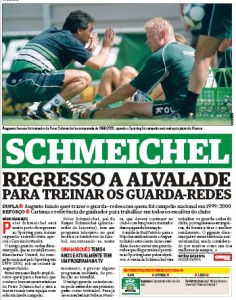 After years working in the media, Schmeichel has never hidden his wish to return to football, and even spoke about the possibility of becoming a manager in some recent interviews.

With the Portuguese media currently claiming that Sporting want Joe Hart to replace goalkeeper Rui Patrício at the club, maybe Schmeichel and the Man City player would get along well in Lisbon.