Atalanta are in negotiations to sign Matteo Lovato from Hellas Verona.

The 20-year-old is highly rated in Italy, and Atalanta’s excellent talent scouts have noted him as one for the present and future. L’Arena, a newspaper which covers the Verona area, reports their local club are asking for €18m, and the Bergamo side want to offer €12m, plus the loan of a player.

And it’s not just any player, the footballer in question is Alessandro Cortinovis. L’Arena say Manchester United have been following the 20-year-old and have an interest in him. They add the attacking midfielder is known as the ‘Little Modric’, presumably because he has a similar playing style to the Croatian.

The report says Cortinovis drives the big clubs of Europe ‘crazy’, suggesting widespread interest but only naming Manchester United. Atalanta know they have a potential superstar on their hands and it’s felt a loan to Verona could help him develop. 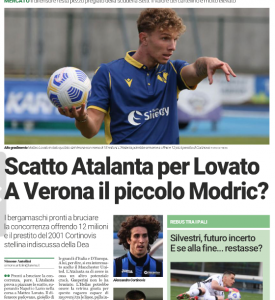 Making an attempt to sign the player this summer seemed unlikely for the Old Trafford club so watching him for Verona could aid with further scouting. Then, should Ole Gunnar Solskjaer want to make a move in the future, they can use the connections they built with Atalanta during the Amad Diallo negotiations.