Sergej Milinković-Savić is set to leave Lazio at the end of this season and Manchester United continue to be named as one of his suitors.

The midfielder was linked to the Red Devils in the previous summer windows and it was also pointed out by Corriere dello Sport earlier this week.

Another Italian newspaper Il Tempo explain the 27-year-old is ‘courted’ by Manchester United and Paris Saint-Germain. He is ‘at the centre of a real market auction’ and Lazio chief Claudio Lotito will not let his star leave for ‘less than €70-80m’ in the next window.

Il Tempo explains PSG are the The Serbia international’s ‘qualified buyer’ because of their ‘financial resources’ and Paris would not be a ‘bad’ place for the player to spend next four to five years of his career.

Manchester United could see Paul Pogba leave them as a free agent for the second time and if it happens, they will have to find a replacement for the Frenchman.

Faced with this possibility, the Old Trafford club are looking at Milinković-Savić and have been in the race to sign him ‘for some time’. For the Lazio star, the option to join United would be ‘less welcome than other clubs’, should they fail to qualify for next season’s Champions League. 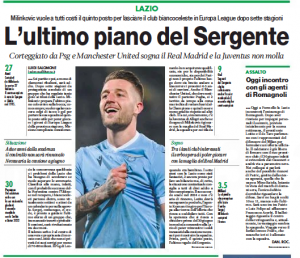 The English club are seventh in the league table with 51 points, trailing fourth placed Tottenham Hotspur by six points.

Il Tempo add that Milinković-Savić’s dream is to join Real Madrid, who have not made any advances to sign him so far.