With the January transfer window done and dusted attention turns to the summer and for Manchester United that means one thing, more Jadon Sancho rumours.

The Borussia Dortmund star was heavily linked with a move to Old Trafford last summer, with it believed that United had identified him as a priority signing.

Weeks and weeks of speculation in Germany and England ensured without a deal happening as both clubs failed to agreed on the player’s valuation.

While Manchester United were willing to pay big, they disagreed with Dortmund’s €120m asking price and, as a result, the player ended up staying in the Bundesliga.

That’s something that has not benefitted either party, with Sancho very much struggling to replicate his form, something the failed transfer has been blamed for, and Dortmund wondering whether they should have sold after all.

The situation, coupled with the German side’s losses due to COVID, has seen the idea of selling Sancho gain prominence, with several reports in Germany hinting that it’s going to happen this summer.

At the end of last month, we covered a report that Dortmund are firmly expecting a departure and since then there’s been several more claims, particularly that they have now lowered their asking price to €100m.

That’s naturally seen Manchester United brought back into the mix and while they’ve not been named, it’s felt that they will very much be there if Sancho is available.

Whether that’s the case remains to be seen, but the consensus is growing in Germany that a move will happen.

WAZ cover the situation and state that Sancho is on Dortmund’s list of potential sales should they miss out on Champions League football this season.

It’s explained that, with losses already totalling €26m from lost TV revenue, Dortmund, who are currently sixth in the table, are facing the prospect of losing another €75m if they don’t qualify for UEFA’s top competition. 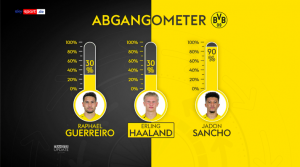 In that eventuality, player transfers would be ‘inevitable’, and they’ve drawn up an eight-man shortlist of saleable assets, on which Sancho can be found alongside Axel Witsel, Manuel Akanji, Mahmoud Dahoud, Giovanni Reyna, Jude Bellingham, Raphael Guerreiro and Erling Haaland.

The last four are more ‘medium-term’ departures but missing out on Europe could force top players, such as Haaland, to rethink their situation.

Sancho, though, is very much the one who could be move one and after Manchester United’s interest last summer, they know there’s at least one suitor.

Furthermore, while they wanted €120m at that point, such a price is ‘questionable’ this time around, and BVB would have to be ‘satisfied with less’ given the ‘tense’ financial situation at the club. In other words, United could get a relative bargain compared to a year ago.

The notion is very much that Sancho can, and probably will, be sold at some point, an idea backed up by Sky Sports Germany journalist Max Bielefeld, who says the forward is 90% likely to leave the club this summer.

This is something of a building idea in Germany, with Sancho’s departure now presented as closer to a foregone conclusion than a possibility.

We’re sure that’s only going to pick up pace in the coming months, although whether Manchester United will knock again, is the key part we don’t yet know.