Manchester United are involved in a transfer ‘war’ for Bruno Fernandes, report O Jogo in their Saturday edition.

The Tottenham claims of last week are reiterated, but Record, who yesterday said Spurs were ‘very close’ to the signing, today reverse on that position.

Back at O Jogo, all the usual things are repeated in this never ending transfer saga, however, there’s one new thing which is sure to annoy those Manchester United fans who are frustrated with Ed Woodward’s efforts in the market.

It’s stated the Old Trafford club are showing ‘indecision’. Whilst their interest in signing the midfielder is still insisted upon, O Jogo state United are ‘hesitant’ to complete the signing.

They can’t really go to ‘war’ and at the same time be ‘hesitant’, unless it’s like Game of Thrones and they’re hiding in the vault at the castle, wanting to fight but not really having the stomach to risk anything. 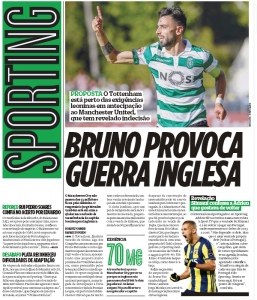 At the beginning of May, A Bola reported Jorge Mendes had been in a meeting with Manchester City about the Sporting player.

At that time a source told Sport Witness that wasn’t the case, and A Bola then reversed.