Manchester United are one of few sides to have been named as a suitor for Ronald Araújo. The defender’s contract at Barcelona expires in 2023 and they have not managed to tie him down to a new deal.

On Wednesday, Catalunya Ràdio reported the La Liga side made an improved offer to the 23-year-old. The details of the proposal weren’t mentioned, but it was stated this was an ‘immovable offer’ and they will not improve it further.

Marca explain the Spanish giants made three offers and the defender rejected all of them so far. They improved their proposal and the last offer included a salary of €4m per year, but it was not deemed sufficient by the centre-back.

The Uruguay international’s performances on the pitch have not gone unnoticed as several teams are ‘very interested in signing him’.

It’s claimed the one that has been in the ‘best position for a long time is Manchester United’ as they were one of the first clubs to move for the player. With Araújo having just over a year left on the current deal,  the ‘time plays in favour’ of the South American.

Xavi Hernández’s side, meanwhile, are hoping to reach an agreement over a new deal before the next window opens and if there isn’t one, a sale would have to be considered, 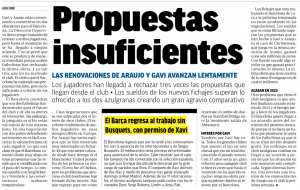 so that they don’t risk losing the defender for nothing in 2023.

Despite Araújo’s decision to reject the latest offer and Manchester United in ‘best position’ to sign him, the report says Barcelona are ‘confident of reaching an agreement’. They have scheduled a meeting with his agent next week.