Manchester United are pushing with ‘insistence’ to sign Edinson Cavani from Paris Saint Germain this summer.

The Uruguayan striker is out of contract at the French giants come the end of the season and so far is yet to be offered a new deal at the club.

That would make him a free agent and a very attractive prospect to several clubs around Europe, regardless of his age.

One of those are Manchester United, according to L’Equipe, who report that they are keeping a ‘close eye’ on the centre forward ahead of making a move in the summer transfer window.

It’s explained that United are ‘backed by huge financial resources’ and so could offer Cavani a ‘huge signing bonus’ to swap Paris for Manchester this summer.

However, a potential lack of Champions League football may be a problem.

For the moment, Cavani is sitting patiently, waiting to see how the situation developed. As yet he has not received word from PSG, particularly over a new deal. 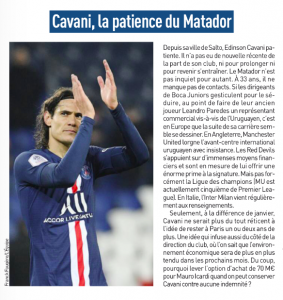 He is ‘not out of touch’ when it comes to the interest in him, though, with it felt that ‘the rest of his career’ appears to be in Europe.

The forward is not reluctant to the idea of staying in Paris for another year or two, and they may give him the chance to do so with the ‘economic environment’ caused by COVID-19 sure to hit their finances.

For example, it would be cheaper to keep Cavani than exercise the €70m option on Mauro Icardi.

Should they decide not to, though, it seems he will have a lucrative offer from Manchester United waiting in the wings.