With Sevilla allegedly entering the fray in the “Saving Private Darmian” rescue mission, the idea of a return to Italy to Roma has quietened a little bit, but it hasn’t gone away completely.

A new full-back is still on the agenda for Eusebio Di Francesco’s side in January (if they make it through to the next round of the Champions League), and the Manchester United man is still on their list.

In fact, while previous reports suggested the clubs were the ones after him, Corriere dello Sport on Wednesday claim the Italian defender has actually been offered around.

His lack of game time under José Mourinho has been very problematic, although that hasn’t been helped by some poor performances from the defender himself in a red shirt. 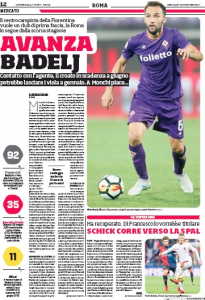 However, the price tag the Red Devils have placed on the 27-year-old could be problematic for interested clubs, with the club trying to get most of their money back.

Few clubs outside of the Premier League will be able to match their demand of €17m, and that might be done on purpose.

With little depth down the sides, it seems Manchester United might want to wait until the summer to reorganise their full-back situation, yet if the right offer came in, they wouldn’t be against giving the move the green light.