Real Madrid want to strengthen their defence in the summer and Villarreal’s Pau Torres has been identified as one of the targets. Los Blancos earmarked the 24-year-old as a potential replacement for Sergio Ramos.

Torres is also wanted by Manchester United, according to Spanish claims.

Bayern Munich’s David Alaba is also a target for Zinedine Zidane’s side and this gets highlighted on the front page of today’s edition of AS.

Barcelona, Paris Saint-Germain and Chelsea are also chasing the Austrian. Therefore, the newspaper explains Real Madrid have identified alternative targets in the event they fail to sign Alaba.

Torres is among them and in a short update, AS talks about Ole Gunnar Solskjaer’s interest in the Spain international. 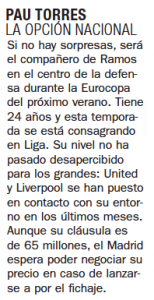 It’s claimed the player’s performances for the Yellow Submarine haven’t gone unnoticed as it has caught Manchester United and Liverpool attention.

The two Premier League clubs have ‘got in touch’ with the player’s environment in recent months.

Torres has a €65m release clause, but Real Madrid remain hopeful to negotiate a fee, if they decide to make an approach for him in the next market.