The English press has been talking about the possibility for the past few days, and now it’s Correio da Manhã who comes up with a similar story.

The newspaper writes that the Red Devils ‘are going to advance’ to sign 27-year-old this summer.

Manchester United are said to be more confident about spending in Portugal following the success of Bruno Fernandes’ transfer from Sporting back in January. 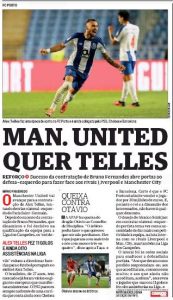 Correio da Manhã claims that Porto will demand €30m for the transfer of Alex Telles, and won’t give any discounts, considering how financially powerful the clubs are who’ve been linked to him.

Newspaper O Jogo is another one talking about this rumour today. They actually cover the news from the English press, and when using their own sources, they say no bids have been delivered to Porto so far. With Paris Saint Germain’s interest having cooled down, the outlet expects Manchester United to kick off the auction for the fullback.

Meanwhile, outlet A Bola is another one with a story about the Brazilian today. They don’t make it clear if their information is exclusive, and say that Porto are demanding €25m for his sale, unless they manage to convince him to sign a new contract with the club.

Given O Jogo and A Bola aren’t insisting they have their own information, it’s worth taking this one lightly right now. Had there been information on Manchester United interest coming out from Porto, then they’d have made that clear.

Correio da Manhã are excitable and dramatic when it comes to transfer rumours, and often eager to throw big claims out.