How do you solve a problem like Gareth Bale?

Well, you loan him out say Marca.

For months, years, there’s been claims in Spain of Manchester United interest, but for various reasons things haven’t gone anywhere.

Bale has repeatedly shown a desire to remain at Madrid, but now it feels like he’s being pushed out of the club, whether that’s against his will or not. A meeting was held earlier this month to get the message across.

Madrid have wanted €100m+, but there’s not been anyone willing to pay that, not even even Ed Woodward at Manchester United.

Now the idea is to loan the Welshman out, with the signing club paying a fee, covering his 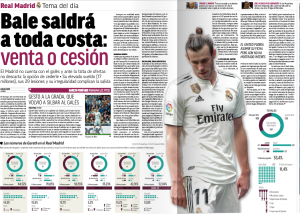 wages, and also having an option to make the move permanent.

For this operation, Manchester United are the first hope for Real Madrid.

It’s thought Arsenal and Tottenham couldn’t afford the wages, Manchester City have never wanted him, and Chelsea have too many problems with their transfer ban.

A loan would certainly be a change on the claims which have been coming out of Spain, but it seems a reasonable option.