Manchester United have made it clear to Leon Goretzka they will offer better wages than Bayern Munich should they make a move for the German.

That’s according to SportBILD, who cover the situation around the midfielder today amid something of a contract crisis for the Bundesliga giants.

They explain that the ‘pressure’ is all on Goretzka, whose contract expires at the end of the season and could therefore leave on a free next summer.

The club have held initial talks over an extension, but Goretzka’s camp is ‘irritated’ that those talks early in the summer have not been resumed as promised.

Other clubs are now ‘getting serious’ in the race for his signature, including Manchester United, who are said to have already presented ‘concrete salary figures’ for a move next year, and that offer exceeds Bayern’s current extension proposal.

According to SportBILD’s information, Goretzka’s management are expecting a contract worth up to €20m for the midfielder, but Bayern are offering between €10m and €12m. 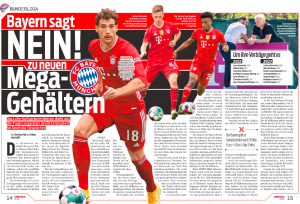 That is why the idea of a move to Manchester United is gaining momentum, with them apparently willing to beat that should it come to it.

What they’d be willing to offer isn’t mentioned specifically, but it’s known they’d like to lure the Bayern midfielder to Old Trafford as a replacement for Paul Pogba, who is also in the final year of his contract.

Whether that happens remains to be seen, but the interest is certainly there and United’s willingness to offer more money seems to be causing problems for Bayern in their attempts to keep the German.