If reports around Europe are anything to go by, Manchester United are looking at Raphaël Varane as their number one choice for the centre-back role next season.

The Frenchman appears set on the idea of trying a new adventure while he still can, and with Old Trafford once again an attractive destination thanks to the work done by Ole Gunnar Solskjaer and his staff, a move to England could be on the cards.

However, that’s not to say Manchester United aren’t looking at other names should a deal for Varane fall through, and it’s no secret Napoli’s Kalidou Koulibaly remains on their list, as well as Liverpool’s.

The Premier League side have been named enough times alongside the Senegalese defender for it to be mere speculation, and Gazzetta dello Sport reckon he’s still someone they would want. 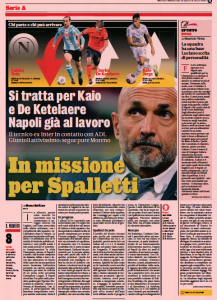 The newspaper state both Manchester United and Liverpool ‘are so fond’ of Koulibaly, with the Serie A side demands, once exceeding £100m, now at around €50-60m.

With a new manager on its way, as Luciano Spalletti seems the favourite to replace Gennaro Gattuso, change is going to follow, and that could include the sale of a couple of star players as Napoli hit the reset button under new supervision.

Manchester City are also mentioned in this story, but considering their big spending on the position last summer and great dominance in the Premier League this season, it seems unlikely they’ll be spending big on a new centre-back anytime soon.