Tuesday’s edition of L’Equipe reports Lyon are starting to accept Moussa Dembele will probably be leaving in the summer.

Regardless of whether the club qualify for the Champions League (they’re currently ninth in Ligue 1), Dembele’s exit is on the horizon, and thought is now turning to how Lyon will replace him.

L’Equipe report Manchester United ‘expressed interest’ during the winter market, along with Chelsea, but a move in January was always going to be unlikely. Lyon have been hit by injuries, and Dembele didn’t want to try and force an exit anyway.

The claims appeared to be coming from the player’s agent, and whilst that doesn’t mean they weren’t correct it suggests an eagerness to hype the player ahead of a potential move.

The 23 year old has scored 19 goals and made six assists this season, good returns in a 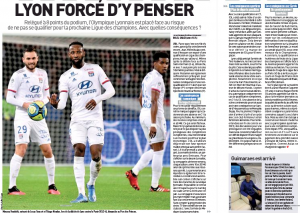 team which has been struggling. Manchester United may well be looking for a new striker in the summer, with Odion Ighalo’s loan signing showing it’s an area of the pitch the club feels is weak, after Ole Gunnar Solskjaer saying so for months.

L’Equipe don’t give an estimated transfer fee at this stage.