Paul Pogba’s words at the weekend about wanting to leave Manchester United this summer have resulted in endless articles around Europe claiming to know what the club will do next.

It was hardly a surprise to learn the Frenchman is looking towards the exit, but that he had the nerve to make it so public shows just how serious he is about finding a new destination this summer.

Should he go, the Premier League club will need to bring more signings in than they had otherwise been planning to do, and now there are multiple claims as to what their plan is.

Catalan newspaper Mundo Deportivo inevitably has a Barcelona slant on things, and reports Manchester United have ‘established a serious of priorities’ for incoming transfers. 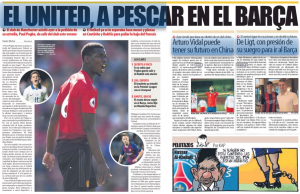 As if by chance, among them are Barcelona players Philippe Coutinho and Ivan Rakitic. These have both been pushed forward as possible sales for Barca this summer, and both have been, albeit weakly, linked with moves to Old Trafford.

This is going to be a theme from now on, with different facets of the European sport media taking their own slants which best suit their own local interests.

Leeds United given hope of signing player after another club’s transfer...