Nicolas Pepe has been the subject of many transfer rumours already this summer, and, to be frank, a lot of the claims have been very hard to believe.

Manchester United haven’t been so strongly involved, which is probably a surprise given they get dragged into so much nonsense. However, Pepe is a right winger and in theory signing the Lille player wouldn’t be such a bad idea.

On Friday, Corriere dello Sport went with a big splash which has seemingly encouraged others.

Covering Napoli interest, it was claimed Manchester United are the ‘real rival’ in the signing race, and could be the ‘pitfall’ for the Serie A club.

Despite that there’s not really a great deal said. 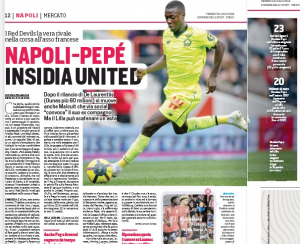 Napoli themselves would be considering offering €60m plus Adam Ounas, which is less than previously claimed offers from Arsenal and Inter Milan, although the thought of either of those paying €80-90m wasn’t easy to process.

Manchester United could afford the Lille player and despite the huge fanfare around there doesn’t seem to be the auction that had been hoped for.