Moussa Dembele has been linked with a lot of clubs over the past year or so, but Manchester United certainly hasn’t been one of the main ones.

The Celtic forward impressing in the Scottish Premiership has caught the eye of many, and a move seems fitting somewhere along the line.

Brendan Rodgers has so far been able to convince Dembele that Celtic Park is the place for him, but if the player continues with his progression then the approaches will continue to come in.

Ahead of Celtic’s Wednesday match against PSG, L’Equipe have a feature on Dembele, who came through the youth ranks at the French club before moving to Fulham. 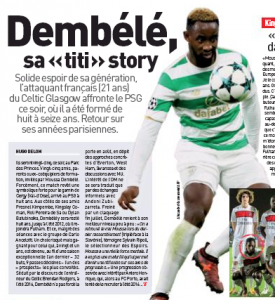 It’s stated that as well as interest from other clubs last summer, which Rodgers managed to fight off for Celtic, there were also ‘discussions’ with Manchester United.

That’s as far as L’Equipe go with the Old Trafford link, and it’s curious to think how Jose Mourinho would have integrated Dembele into his squad, especially after the signing of Romelu Lukaku.

For now, Celtic hold on to Dembele, and Rodgers will be looking to make sure that’s the case beyond January. With Zlatan Ibrahimovic back on the pitch, a Manchester United effort in the near future seems unlikely.