When Manchester United loaned Marcos Rojo to Estudiantes in January, it seemed like the defender could end up staying in Argentina for good.

Many claims from his home country say he’d like to remain there, even though the loan deal is only supposed to run until the end of June.

However, the latest news about the price the Red Devils have been demanding for his sale isn’t making Argentine clubs very confident.

There are two interesting pieces about Rojo’s future today. One of them comes from Diario Hoy, claiming that Estudiantes are already looking for potential replacements in case he leaves.

They also bring some information regarding Boca Juniors. The Buenos Aires side would try a six-month loan deal with Manchester United in case Conmebol confirms the continuation of the Copa Libertadores this year.

But the La Bombonera side aren’t keen on spending money on a permanent signing, so a loan would be the only option on the table. 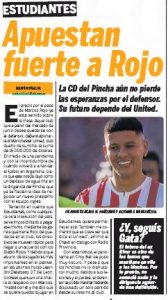 They say Manchester United are demanding an amount of US$15m to sell him, and the news is considered a ‘bucket of cold water’ for the Argentine side.

It’s said that Estudiantes or ‘any other club in the country’ have no conditions to afford such an amount. That’s why they’re in talks with Manchester United to see if they can extend the loan deal as quickly as possible.

Local media back up CL club’s interest in Southampton player –...