Manchester United are once again linked to Sporting’s Bruno Fernandes this Monday. This time, the story comes from Portuguese newspaper Correio da Manhã.

Although a headline saying the club are ‘keeping an eye’ on the midfielder sounds a little too weak for the rumour at this stage, since the chase has been going on for months, the outlet has a few interesting things to tell.

Correio da Manhã says that Manchester United are ‘delighted’ with Fernandes’ recent performances and are now ‘ready to advance’ an offer for him at the end of the season. They make clear this is their own information.

Although the player is protected by a €100m release clause, the newspaper says that Sporting don’t live a great financial situation, and that’s why they want at least €70m, which would be enough to make their biggest sale ever. 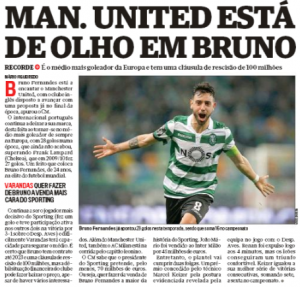 Bruno Fernandes has 28 goals and 15 assists this season, and the local press says he’s the European midfielder with most goals in a season ‘ever’.

This weekend, it’s been reported that Manchester United scouted him in the 3-1 win over Desportivo Aves, when he scored once again.