A recurring name under the José Mourinho era, Lorenzo Pellegrini’s links to Manchester United went quiet after the Portuguese manager was sacked back in December.

The last we heard of them was back in November, when it was pointed out the Roma midfielder had a €30m release clause in his contract, payable in two €15m instalments but only applicable in the summer.

With that transfer window just around the corner, Corriere dello Sport thought it would be a great time to remind everyone of it, especially since the 22-year-old has a few questions to ask his current side.

Before committing himself to his current side, Pellegrini wants to know where he stands in the hierarchy and what Roma’s plan is to become competitive once again, and only after those two questions are answered will he establish his plans going forward. 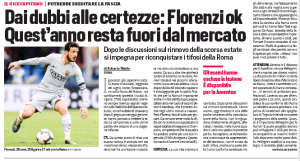 Should he decide to leave, Manchester United and Inter are the two clubs who are said to have ‘contacted’ him, suggesting he is aware of their interest going into the next transfer window.

With the Red Devils desperately in need of quality in midfield and fans wanting a team rather than a bunch of overpriced individuals, where better to start than a talented Italy international who would cost them an initial €15m, making him relatively risk free?

Is that too sensible for Ed Woodward and co.? Perhaps it is.