This week, reports from England claimed that Manchester United scouted the Benfica wonderkid Florentino Luís in a game against Braga. The Red Devils would be ready to battle Manchester City for the signing.

Portuguese newspaper A Bola covers the claims today, and has a couple of things to add to this story.

Firstly, they don’t really believe Manchester City are in for Florentino anymore. They say Pep Guardiola’s side were interested during the summer, but had to choose between him and Rodri, going for the Spaniard.

But it doesn’t mean Manchester United would have an easy task. Besides being protected by a release clause of €120m, Florentino’s wish is also to ‘affirm himself’ at the Eagles before moving abroad. 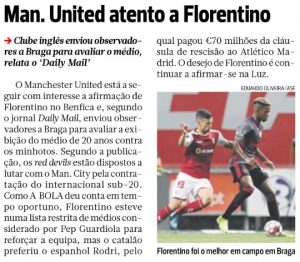 Manchester United have in fact been watching Benfica’s games since the start of the season (like most recent seasons), and at the start of September, the very same A Bola said the Red Devils were keeping an eye on Ruben Dias and Florentino Luís.

So this looks like one of the cases when the news come back and forth. What we wonder is why haven’t A Bola pointed out they broke the news first… Sometimes it looks like they just want to show the report is coming from elsewhere.

Then the Portuguese media can’t be blamed for all the hype!