Today is the first day in a long time that Manchester United are not named in the Bruno Fernandes saga.

The Portuguese press doesn’t have a single mention of the club today, in reference to Bruno, despite recent claims that his move to the Premier League could be really close.

And there’s a good reason why things have cooled down. That’s because Sporting president Frederico Varandas has spoken to the local press, and didn’t wound like he’s selling Fernandes in the next few days.

The president has been interviewed by Sporting TV, and was very calm talking about the club captain, claiming they hope he can stay at the Lions for next season. 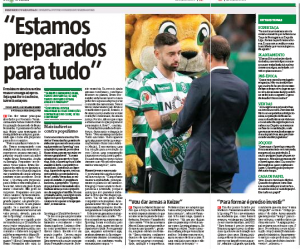 “It’s obvious that he will be wanted by big clubs. It doesn’t imply that he leaves. It’s also not a drama if he leaves,” Frederico Varandas told Sporting TV (via O Jogo).

“If he stays, Sporting have plan A; if he leaves, we have plan B. If in the market they want Bruno Fernandes, it must be a heavy amount.”

Bruno Fernandes’ contract with Sporting has a clause which says the club must pay him €5m in case they reject an offer of €35m or higher. And Varandas claims this should not be a problem, since it won’t force them to sell him.

“Sell for the €35m clause? (Laughs) He will not leave for €35m. The club president must know how to understand the dressing room and realise and recognise the value of these players.”

That’s a message to Manchester United and others: It’s going to require a ‘heavy amount’.