Jules Kounde could continue at Seville for a further season, partly down to the current economic situation in football, report AS in their Friday edition.

The Spanish newspaper explain that whilst there’s been interest in the central defender, no club has shown any sign of being willing to pay more than the €55m Manchester City offered before the start of last season.

Going on to sign Ruben Dias from Benfica, with that working out very well, City are now likely out of the picture, and AS report Manchester United, Chelsea and Arsenal have replaced them.

Kounde is just 22-years-of-age but has shown enough to be one of the most highly respected defenders in Spanish football, and is in France’s squad for Euro 2020. 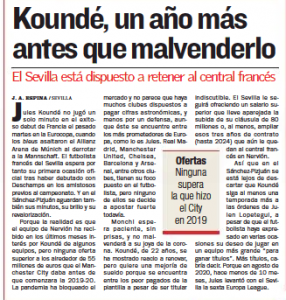 Sevilla transfer chief Monchi is determined not to undersell the player and is no rush to listen to offers below what City put forward. AS say Manchester United, Chelsea and Arsenal have their ‘focus’ on Kounde, but none of those clubs has yet made a decision to ‘bet hard’ on his signing.

Therefore, another season with Seville is very much a possibility and it’s going to need something big to take him away.