When it comes to signing young players, it’s not very often that Manchester United are beaten to a signing.

United’s track record of developing young players, the size of the club and the history associated with it, is often too much of a lure for young players.

Every so often, though, someone manages to keep a youngster out of the clutches of Old Trafford, and that’s precisely what happened with Julian Pauli.

Bild explain that Manchester United had been chasing the 14-year-old defender ‘for months’ alongside several other European clubs. 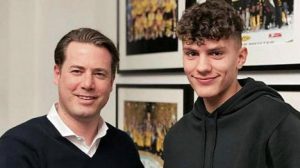 The youngster, who was born in London but grew up in Düsseldorf and has dual-citizenship, is considered a ‘blue-chip’ after emerging at Fortuna Düsseldorf over the last three years.

He has caught the attention of clubs around Europe, chief among them Bayern Munich and Manchester United, who have all held ‘transfer discussions’ with him and his parents.

Unfortunately for all of them, they’ve missed out to Borussia Dortmund, who’ve managed to seal the teenager’s signature ahead of the competition.

Bild explain he’s chosen the Bundesliga side because it means he can continue living with his parents in Düsseldorf, has observed Youssoufa Moukoko’s development at the club and because his advisor Thies Bliemeister pushed for the move.

United, it seems, were fighting a losing battle from the start then, and will be left wondering what may have been should Pauli go on to become the star many believe he can be.