Ralf Rangnick is again being linked with a job in England, and again it doesn’t feel especially concrete.

The former coach and sports director of RB Leipzig, and advisor to the Red Bull sports group generally, has been linked with United before and also the England national team job.

This week’s edition of SportBild reports the 61 year old is an option for Bayern Munich should they decide to dispense with current manager Niko Kovac.

The German would be an unusual appointment, given his mixture of experience as a coach, sports director and football advisor. Similar to how it’s felt before, these claims 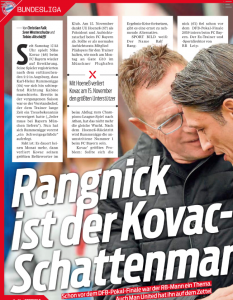 would appear to be coming from someone close to Rangnick.

Him pushing the claims personally wouldn’t completely ruin them, because there would be every chance he’s also pushing himself to Manchester United directly.