Home Europe Manchester United can ‘guarantee the money’ that would make club ‘capitulate’ for...
SHARE

The midfielder is said to be considering an exit, but isn’t getting too anxious about the situation and is in no hurry to put pressure on his club. That could partly be because Corriere say there’s been no official offers sent to Lazio, despite repeated claims of interest.

Manchester United get a mention and it’s thought Milinkovic-Savic could be an alternative target should the Frenkie de Jong move finally collapse. Arsenal and Newcastle are said to have been in contact with the player’s agent, although those destinations aren’t thought to be attractive enough for the midfielder.

It’s Manchester United who are pushed forward the most, with it stated the Red Devils could ‘guarantee the money’ that would make Lazio ‘capitulate’. 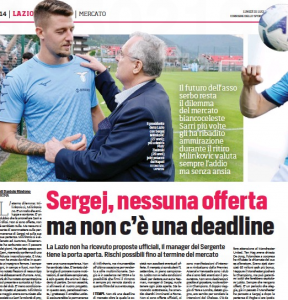 Despite all of that, they haven’t actually made a move and the whole situation could drag on throughout the window.

Lazio will remain open to a sale, and this is a situation to watch, without any real action so far.