The Catalan media, especially Sport, continue to talk about the prospect of Erling Haaland signing for Barcelona, and they continue to mention other clubs including Manchester United.

Saturday’s edition of Sport states there’s set to be a war to sign the 20-year-old Borussia Dortmund player… and Mino Raiola is going to love it.

According to the picture set by Sport, he’ll sit there waiting for each giant club to request his presence and submit a huge tempting amount for Haaland, in terms of wages and commission, before waiting for the next club to show up.

Whilst Manchester United won’t relish getting involved in these Raiola games again, they’ll almost have to if they want to get Haaland away from BVB in the summer. 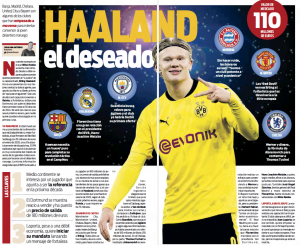 Ole Gunnar Solskjaer’s side ‘have moved’ for the signing, although it’s not made clear what that actually involves, and several other clubs are also in the transfer ‘war’.

Barcelona’s big issue is money and their current financial problems look to be a disadvantage.