On Saturday, we covered claims from Spain that Tottenham are willing to pay €60m for Giovani Lo Celso, and Manchester United are very keen on his Real Betis teammate Junior Firpo.

The claims felt pretty strong, they were being carried by journalists local to the Seville club and more than one newspaper had the information independently.

It was the Lo Celso claims which got the most coverage, with Junior Firpo and Manchester United being the lesser part of the story, that also gave some confidence because it wasn’t as though the Red Devils were being used to hype an article.

Sunday’s edition of Marca has it differently, from another journalist in Seville.

They say it’s Lo Celso who Manchester United are interested in, and the club could provide competition to Tottenham and Real Madrid if Paul Pogba gets a move.

Described as being ‘very attentive’ to the potential signing, Manchester United have sent officials to Spain to watch the player. 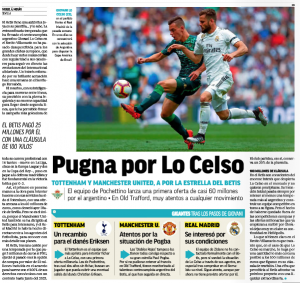 Now, at this point it’s worth noting those officials could well have been watching Junior Firpo instead, that story felt a lot stronger.

Marca didn’t have the twin claims on Saturday, so there’s a good chance their journalist wasn’t fed the information and is now going off on a different tangent.