The Spanish media, especially that of the Catalan variety, is having a strop about Matthijs de Ligt.

The Dutchman was supposed to simply follow his Ajax teammate Frenkie de Jong and agree to join Barcelona on the wages they offered him towards the beginning of the year. However, competition arrived, and that De Ligt is insisting on thinking things over isn’t going down very well… how dare he!

Sport cover the situation on Wednesday, and aside from their De Ligt rants, there’s a little bit about Samuel Umtiti. It’s claimed Manchester United ‘have asked’ about signing the Frenchman, but the Old Trafford club have no chance if the pesky De Ligt doesn’t move to Barca.

Of course, Manchester United themselves have also been linked with the Ajax player and it’s quite likely they’d prefer him over Umtiti anyway, yet they may end up with neither.

There’s a claim of a potential ‘formal offer’ from the Premier League club, but it doesn’t seem to have arrived or made any impact. 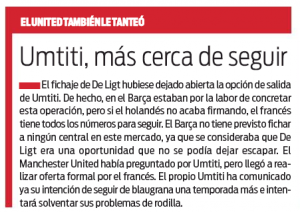 The former Lyon player plans to stay and try to ‘solve his knee problems’, which sounds like a warning in itself.

Everything could change if De Ligt decides for Barca.